Marine litter and biodiversity interactions in the Mediterranean Sea

Marine litter is at present a top ranked pollution menace to the conservation and health of marine biodiversity and functional ecosystems. In the Mediterranean region, the Interreg-Med programme (2014-2020) has co-financed several initiatives related to marine litter, including the Mediterranean Biodiversity Protection Community featured by PANACeA, to help network and harmonize approaches to transferable evidence-based solutions and reduce pressures coming from marine litter and impacts on biodiversity and ecosystems in the region.

Research efforts on marine litter are increasing our knowledge on the amount, composition and impacts on marine ecosystems, biodiversity and people. However, the number of studies is scattered and geographically unbalanced, making it difficult for policy makers, managers, the business sector and the general public to accurately understand the dimensions of such a modern challenge and the urgency to react.

Based on the LITTERBASE by AWI at global scale, PANACeA has developed MedBioLitter, an open database and spatial geoportal on current scientific knowledge related to marine litter and biodiversity interactions in the Mediterranean region.

Hosted by ETC-UMA, PANACeA lead partner, the MedBioLitter thematic database is regularly updated to include key scientific findings by the Interreg Med Biodiversity Protection projects and a network of partner institutions active on marine litter research. The MedBioLitter database includes, in addition to the geolocation of more than 900 studied areas and species, direct access to more than 100 articles; the most recent scientific literature on marine litter and biodiversity in the Mediterranean including spatial data, metadata and authorship. Furthermore, the database includes a mechanism for any author interested to submit new information for analysis and inclusion in future updates.

The following report highlights the conclusions coming from the analysis of MedBiolitter spatial and scientific data on interactions between marine fauna and litter in the Mediterranean published in English as in v.8 updated in March 2022, integrated with marine litter data collected by ACCOBAMS in the frame of the Aerial Survey Initiative on cetaceans and marine litter. The analysis focuses on the impacts on marine megafauna (large mammals like cetaceans and seals, turtles, cartilaginous fishes like sharks and rays, and scombridae like tuna and swordfish). 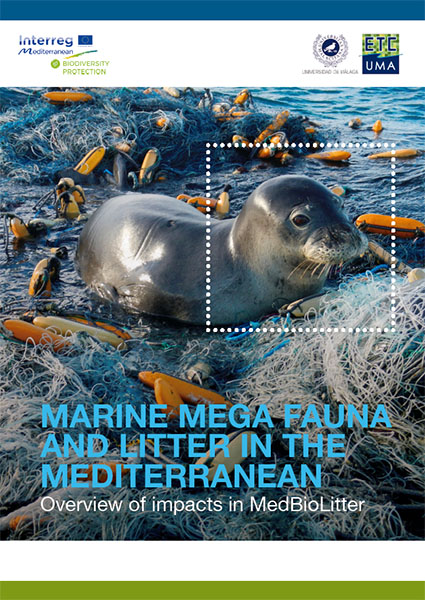 Marine mega fauna and litter in the Mediterranean:Overview of impacts in MedBioLitter

Five out of the eleven projects within the Mediterranean Biodiversity Protection Community have developed marine litter pollution knowledge: ACT4LITTER, AMARE, MEDSEALITTER, PHAROS4MPAs and PLASTICBUSTERSMPAS. These projects have addressed issues related to marine litter policies, sources, flows, monitoring, management, measures and impacts, whose main results have been synthesised in collaboration with PANACeA to contribute to Mediterranean and global marine litter reduction challenges, particularly in marine protected areas.

Transformative changes towards more sustainable production and consumption patterns based on sound scientific evidence and management of marine litter and its impacts are needed to tackle marine litter at all levels. To support these changes, the following knowledge base including tools and measures to support a wide range of stakeholders, from local managers to regional policy makers, are now available online:

Didn’t find what you were looking for?

Check our Library of Resources for marine litter related publications or send an email to panacea-med@uma.es.